RSS
← Tomorrowland: Not a Moment Too Soon
Terms of Enlistment: I’m On Board →

The Annihilation Score: Not Quite the Crescendo

I’ve intimated in past posts that I’m skeptical of long-running series. I’ve borne with a couple of them – Honor Harrington, the Dresden Files, and enjoyed both. But stringing them out eventually reduces them to echoes.

And I’m a little worried that another favourite series might be heading the same way. But I’ve not given it up, or I’d not still be here.

I was pleased to welcome back Charles Stross’ Laundry Files: the exploits of the British secret department in charge of preventing incursions by supernatural alien intelligences and the humans enthralled to them.

After the last two books, I was getting a little annoyed about how the bigger context of the impending cosmic alignment disaster – known in-story as CASE NIGHTMARE GREEN – kept getting stalled in the interest of telling smaller-scale stories that seemed to be sideshows both for characters and for the main mythology events.

While a certain amount of this is true for the new book, the Annihilation Score, it manages to have a lot of interesting stuff going on all the same. Not least because, quite unexpectedly, the point-of-view character is no longer Bob, the geeky computer sorcerer. It’s his wife. 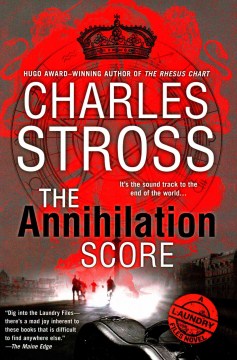 Dominique O’Brien – Mo to most people – a philosopher, violinist and combat epistemologist has been, since the second Laundry book, the custodian of a sinister violin. Molded from human bone and empowered by the agonies of the victims sacrificed to build it, it is nevertheless a powerful weapon for the Laundry to drive back the creeping horrors from beyond. However, the cost to her sanity and the changes wrought on Bob by the events of previous books have, combined with the incredible stress and trauma of their duties, severely damaged their marriage.

At the same time as she copes with this, Mo is thrust into a new challenge. The effects of the sea change in the fabric of reality are becoming impossible to conceal from the general public. In particular, a lot of people are showing signs of unusual powers – superpowers, in fact. And keeping the lid on it is out of the question as a result. But, rather than operate openly, the Board of the Laundry puts Mo in charge of a front organization in charge of recruiting superheroes to aid the police, or to deal with the ones who won’t. Thrown together with some persons who have had entanglements with her husband, and a dashing police chief, Mo’s greater enemies, more than any wannabe supervillain, are her own trauma and psychological damage, the violin tempting her further into darkness, and a dastardly conspiracy within the British…

See, the perennial problem with the Laundry Files lately is that they keep reverting to the ‘enemy in our own ranks’ plot. Four of the books and two of the novellas have already done this in one form or another. It’s getting to the point where it seems like Britain is in more danger from itself than from Nyarlathotep.

At the same time as it keeps repeating itself, the novels are also wandering from what made them so effective. Evoking the Lovecraftian mythos, speaking of alien intellects and the ghosts of civilizations millions of years old, lurking at the edges of reality, made the books seriously scary. But the buildup of that mythos – a ‘hierarchy of horrors’ to use a phrase from the Fuller Memorandum – sort of plateaued out during the Apocalypse Codex. Ever since then it seems like the threat remains small groups of supernaturally-enhanced people. People just aren’t scary the way cosmic alien deities are scary, simple as that.

If it weren’t for that, it wouldn’t matter so much that the books also aren’t as funny as they used to be. Stross writes very witty dialogue, but seen through Bob’s or Mo’s deteriorating mental health, the collision of supernatural weirdness and workaday procedure and form-filling just isn’t very funny anymore either.

Having said all that, I could scarcely put this book down. The Cosmic Horror element is preserved somewhat by the violin – Lecter, as Mo calls it – getting inside her head like a combination of Cthulhu and the One Ring. The problem is that the main mystery gets put on hold for a long time while Mo deals with personal trauma and on-the-job stress, so the ambience of chill creepiness has to be built up very quickly in the run-up to the climax.

That’s not to say that Mo’s personal trials aren’t good reading: her PTSD, flashbacks, nightmares and workaholism are very persuasive and sympathetic. At the same time, her strength and professionalism in the midst of it makes her an admirable character. Her anger and resentment at the way the Laundry runs people ragged and the way she and other professional women are treated is intense and moving – a bit more feminist propaganda to add to the heap, one hopes. There’s a certain amount of humour surrounding public relations, superhero tropes and office politics, though not an awful lot.

It’s kind of interesting the way that Mo is put in charge of a primarily female team – there’s even a mention of the Bechdel Test in dialogue – in a way that suggests a theme about the tribulations of professional women. Mo’s tribulations aren’t over yet, although there’s a promise of her work expanding in scope in stories to come. Hope is also lent for hers and Bob’s relationship as she starts reaching a level on par with what he reached. Too soon to know for sure though.

I quite enjoyed the Annihilation Score – it made good use of groundwork laid in previous books, gave us something new and a fresh perspective by putting Mo front and centre. That said, I feel like the personal/political drama and the Cosmic Horror story keep jockeying for space against each other, so that it isn’t clear which is the A or B plot. Still, nothing deal-breaking has happened. And as I’ve said in the past, the Laundry Files tend to demand a few re-reads before you can make sense of them, so my first impression may improve.

So, like Mo, I’ll keep calm and carry on.

← Tomorrowland: Not a Moment Too Soon
Terms of Enlistment: I’m On Board →