With the Christmas season at hand, I’ve been debating what to review that would fit the occasion. I’ve never seen It’s a Wonderful Life or Miracle on 34th Street, the old claymation Rudolf the Red-Nosed Reindeer is so bad I wouldn’t know where to start, and much as I love Merry Christmas, Charlie Brown it’s rather insubstantial.

It occurred to me that the key, the true meaning, if you will, of Christmas is childhood joy and family. So I’m going to talk about something that brought my family together and had a profound impact on my childhood.

In the late 90s-early 00s my family, particularly my brother and I, had one fictional work firmly at the centre of our lives: Myst, and its sequel, Riven. Myst was a trendsetter for computer games in the 1990s. Created by the brothers Rand and Robyn Miller of Cyan, it’s a fantasy adventure game that spawned a franchise of five sequels, two spinoffs, an online multiplayer game, and three novels.

In the first game, Myst, you discover a strange book that describes an island in another world. You lay a hand on a page and find yourself teleported to the island in question, which, funnily enough, is named Myst. The island is littered with strange devices, combination-code locks and more books linking to other worlds (Ages, as they are called) with more puzzles, lost diaries and other clues to a story of betrayal, loss and dark secrets.

In the second game, Riven, you’re sent on a mission to the Age of Riven to stop a tyrant who threatens to unleash his madness on countless helpless Ages. You’re thrown into a new world of puzzles and clues, tracing the history of a fractured family, a lost civilization, and one man’s insane ambition.

There are more sequels, but the heart and soul of the franchise is Myst and Riven. Cyan was still a small company and they have a creativity and craftsmanship about them that reflects that. Later instalments were handled by big companies like Ubisoft and, frankly, developed an increasing air of money-spinning.

Myst and Riven, before they’re fantasy, or adventure, are a mystery – which makes sense, if you think about it. Weirdly, a lot of the game involves reading other people’s diaries. Journals, letters, and secret messages abound, sent by people you seldom see and which you must use to attempt to reconstruct who they are and what happened to them. We spent hours tossing around theories as we tried to discover how various clues fit together. The mystery is punctuated with logic puzzles that open locked doors, turn on power, and open the way to new clues, all the while letting you make deductions about the nature of the world – indeed, worlds – you are in.

And those worlds are remarkable. Douglas Adams described Myst as ‘a beautiful void,’ words that cannot be bettered. It can actually be quite unnerving as you wander the islands, pushing random buttons and discovering an hour later something has changed and you wonder whether you did it and whether, perhaps, you are being watched…

There are drawbacks. Myst has very 90s graphics that the revamped ‘realMyst’ version doesn’t completely overcome. The victory scenario isn’t locked off until you play the rest of the game. The only thing stopping you from going straight to the final mission is not knowing how, so a second playthrough might feel like just going through the motions.

The movement controls are a little old-fashioned. RealMyst added a fluid 360-degree motion system but Riven is still like clicking your way through an incremental slideshow.

Still, Riven improves on most of the issues; the graphics use photographed textures for a startling degree of realism that has aged incredibly well – it’s definitely the best-looking game in the franchise. Every time you start a new game the lock combination puzzles are re-scrambled so that you still have to find them, and you have get to a certain point in the game before it’s possible to trigger the ending. Some puzzle clues are widely scattered, which in Riven’s much bigger game world gets a little frustrating. To this day there is one puzzle that I can’t solve without the walkthrough.

The sole flaw in the world building is that some locations were clearly meant to be puzzles and nothing else. We’re to understand that people lived on Myst Island, and you can examine personal items like dinnerware and inkstands in some Ages. So it is a little distracting to realize that nobody in the world of Myst appears to require a toilet.

It must be said that the Myst games are awfully mellow. There are no weapons, no explosions, and no monsters; just you and an island. You don’t have a voice or appearance, either; you’re a silent stranger. That does let you imagine yourself there rather than remote-controlling somebody else, though. Apparently the Millers are deeply pacifist, so they wanted to do a game that was challenging and immersive without using violence and gore.

And do you know what? They nailed it. The games grab the imagination with a combination of escapist fantasy and detective work. The setting is one of the most stunning and beautiful I’ve experienced in any medium, a combination of original fantasy landscapes, steampunk aesthetics and some of the most meticulous world-building imaginable. There are lots of little touches, like strange knickknacks on a bedside table, that are just there to create a sense of completeness to the worlds you move through without seeming like fluff, and without telling you too much and spoiling the atmosphere. 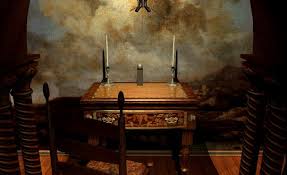 The sound design gives the environments so much reality that you can almost smell the pine needles and feel the sea air (the Millers clearly took inspiration from the landscape of their native WashingtonState). Robyn Miller’s imaginative musical tracks help create the emotional motif of each setting. The games get into the imagination so completely that 16 years later, the sight of wood panelling, brass fixtures, leather-bound books or the smell of pine trees on a wet spring day compels me to go play it again.

Indeed, the atmosphere is my favourite part. It’s distilled curiosity. Not only are you driven to solve the puzzles and the main mystery, but the worlds give you lots to grab onto as you try and interpret the characters, environment and civilizations around you. Scrutinizing the in-game cultures played a part in my choosing to study archaeology later in life.

What few characters there are, are played by live actors, not CG-characters, and seem real and important as a result. The pressure of trying to help them or hinder them, depending on which side they’re on, makes accomplishing that mission very satisfying. The story is a subtle one, in a way; a lot of the drama has already happened by the time you show up. But as you learn about it and bring about the resolution, a beautiful theme of redemption and closure emerges. One reason the later games, except maybe Myst III: Exile, lack this impact is that this theme is present but depersonalized.

The rest of the franchise has appeal, especially Exile and the novel the Book of Atrus, but they’re optional at best and spoil the mystique at worst. The core of the experience, and by far the best part, are Myst and Riven themselves. The story they tell is powerful, and the atmosphere makes it that much more gripping. The old-fashioned graphics are more quaint than unpleasant and the world building is second to none. RealMyst and Riven are available on Steam, compatible up to (unofficially) Windows 7. As retro and slow-paced as they may be, get them anyway (they’re cheap as borscht, I might add). It’s like being the main character in the Chronicles of Narnia as written by Agatha Christie, and you will never experience anything like it. It had a defining impact on my life, and it has all the power that effect suggests.

So give it a try. The ending has not yet been written…

Posted by ncc1701alex on December 9, 2012 in Holiday Retrospectives, Video Game