Skyfall: Around the World in 80 Cliches

No, that’s a bit too obvious.

Not much point bothering with a preamble now. Skyfall: the new James Bond film in the dynasty of Daniel Craig. 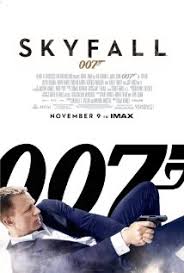 Everybody’s favourite British super-spy is in a moment of crisis as MI-6 is under direct attack from a master hacker who has it in for his boss M. Bond has to chase leads through famous world sites, gloves-off fight scenes and beautiful women while an executioner’s axe hangs over the whole foundation of his life and work.

Since Craig was brought on as the new Bond, first in Casino Royale and then Quantum of Solace, the franchise seemed to be reinventing itself. The fight scenes were realistically brutal and drawn-out, the gadgets tended to be pretty straightforward when they existed at all, and the plots had a real-world resonance and grounding that smuggling diamonds to build a giant laser satellite just doesn’t have.

The other thing that was interesting about Craig’s Bond was the way he was characterized. He still had the suave, blasé lady’s man exterior, but there’s a clear indication of an emotionally detached, violent and self-loathing misanthrope informing that exterior. The first repartee between Craig and Eva Green in Casino is the most frank depiction of this, but it continues throughout.

Skyfall, however, possibly because it’s Bond’s 50th anniversary, is hearkening back to the old Bond formula. The famous theme song is much in evidence; he introduces himself with the traditional line. Q is back in the picture, played to perfection by Ben Whishaw, who has joined Benedict Cumberbatch and Tom Hiddleston in my fangirl friends’ British squee gallery. The gadgets he hands out are clever but not over-the-top. There are lots of other little touches that reclaim the old Bond image. One of the best is that we have Moneypenny back, played as a crack shot, an equal to Bond in wit, grace and determination, and a woman of colour, no less. The repartee between Bond and Moneypenny and Q are absolutely the highlight of the film for me.

For all that, it has many drawbacks. The resurrection of the old formula isn’t altogether a good thing. I never got into the old James Bond because he’s a womanizing, objectifying bad boy, and we’re apparently meant to admire that in him. Much as I like Connery’s Bond, he was the worst. Pierce Brosnan was a little better; he at least had to good grace to look upset when his lady of the hour got murdered.

Craig was depicted in the same way, but part of his character is that it’s not to his credit. In Brosnan’s day and before, M would just shake his/her head in bemusement at his behaviour. In Craig’s films, M calls him out severely on it, as does Vesper, and while it might be a means to a worthy end, there’s no pretending he isn’t oftentimes manipulating them. But in this one he just seems to bed every woman he meets on general principle, regardless of whether he fancies the lady or needs to manipulate her.

The plot seems to be taking notes from the Dark Knight, with twists and setbacks that makes the villain seem like a mastermind and a lot of the movie is just trying to catch up with him. It is a really fine example of a villain who’s scarier when you can’t seem him and I was on the edge of my seat. Unfortunately, the villain, as it turns out, is scary only when you can’t see him. When we finally do meet the shadowy man-behind-the-man, he’s a complete dweeb. He has the emotional maturity of a ten-year-old, the whiniest monologues I’ve ever heard in a villain, and a shirt that’s worse than all of that! His driving grudge against M and her cold-blooded management style is certainly profound and intense, but the performance driving it falls flat to me. And I’m just not sure how to feel about the fact that he’s depicted pretty clearly as a campy homosexual. He makes a blatant pass at Bond and I thought to myself, “Ah. So apparently we as a culture have not moved past the model of evil = he wants to compromise the stolid masculinity of our big, tough hetero hero.” But then Bond makes a crack that implies he’s not necessarily all about the ladies, and I honestly couldn’t decide whether we’d successfully subverted that old standby or not. On a related note, Bond actually cries in Skyfall, so we make progress.

The plot itself is serviceable but a little unfocused. The trademark globe-hopping seems done mostly for its own sake and the trail of clues seems remarkably sparse compared to the previous two Craig Bond films. It really seems more like M’s movie than James Bond’s. Now, a movie about Judi Dench as a spymaster is no bad thing, and since she’s bowing out of the role after long service, Dame Judi deserves a grand exit. However, I feel the balance of the film was thrown a little off-kilter. M’s own character is important, but Bond’s relationship with her should have been the focus and I don’t think that it is. At the same time, questions are posed about whether what M does and how she does it are right and proper, but they aren’t ever really answered, so the thematic structure, abounding with possibilities as it is, doesn’t really go anywhere.

If Casino Royale and Quantum of Solace had the focus and precision of a sniper’s bullet between the eyes, then Skyfall is like a close-range shotgun blast. It does basically the same job and makes some fascinating patterns on the wall, but it is a little untidy. It seems that with Craig’s stint as 007 the movies were starting a new era of preserving the exciting action and intrigue while beginning to shrug off a lot of the drawbacks; the sexism, if not outright misogyny, the one-dimensional machismo, the absurd evil plans, the gadgets that even the Mythbusters can’t make work, and bring in some visceral realism and character depth to fill the space. With Skyfall, though, even as we’re moving away from those clichés, a bunch of trademark tropes and flourishes that depended on those clichés gets dumped over the top of it like putting spaghetti sauce on ice cream.

Don’t get me wrong, I liked Skyfall. I liked it a lot. However I’m hoping that the showy side of this movie is just in the name of 50 years of Bond and we can stick a little more closely by the newer formula in future. Onward, Mr. Bond.

2 responses to “Skyfall: Around the World in 80 Cliches”