RSS
← The Dark Knight Rises: A Thrilling Conclusion
Pixar’s Brave: We Have Bears →

The Leviathan Trilogy: A Whale of a Good Read 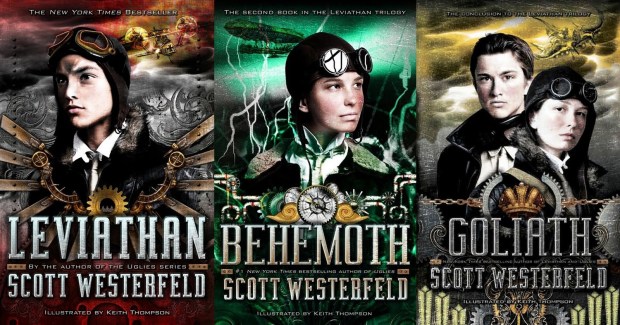 When I walk into a bookshop, my first stop is usually the Young Adult shelves. Regardless of target audience, it’s the place whence the finest examples of fantasy literature seem to appear.

With that in mind, I just finished Goliath, last part of Scott Westerfeld’s Leviathan Trilogy. In addition to being Young Adult fiction, it’s also alternate history, a genre I have fairly limited experience of.

The year is 1914, and Germany has just declared war on Britain. However, instead of imperial tensions driving the conflict, the two factions are split by their technological doctrines.

On the one hand, we have the Central Powers – Germany, Austro-Hungary and the Ottoman Empire – known as ‘Clankers’ who use ‘mechaniks,’ basing their military and infrastructure on steampunk-style machinery a bit like Imperial Walkers that run on boiling water and coal.

Meanwhile, the Triple Entente – Britain, France and Russia – are ‘Darwinists.’ Society replaces most machinery with ‘beasties’ fabricated from the ‘life threads’ of natural creatures. Krakens take the place of submarines, a massive global nerve network replaces the telegraph service and zeppelins are substituted with aerial whales, massive ‘hydrogen-breathing’ ships filled with an artificial ecosystem of attack birds, messenger lizards, and watchdogs.

In the first book, Leviathan, Deryn Sharp, a teenaged Scotswoman and experienced balloonist, has disguised herself as a man to become a midshipman aboard the airship Leviathan. Said airship takes aboard Dr. Barlow of the Zoological Society, an expert in life thread fabrication and granddaughter of Darwin himself. They are setting out on a secret mission to Constantinople; Dr. Barlow brings aboard a mysterious cargo as a bribe to keep the Turks from coming in on the side of the Germans.

Meanwhile, word of the declaration of war reaches the young Austrian Prince Aleksandar when he is taken by his mentors aboard a land ship at the dead of night. His parents, Archduke Ferdinand and his commoner wife have been secretly assassinated by Alek’s granduncle, the Emperor. Ferdinand opposed war and also received a letter from the Pope granting Alek a place in the line of succession, making him a pretender to the throne. The plan, to Alek’s dismay, is to flee to Switzerland and wait until the aged Emperor dies, so Alek can claim the throne and save the day.

Alek and Deryn meet when the Leviathan is damaged near his hideout by German attackers. Against his mentors’ wishes, he aids them and ends up helping repair the ship, but German attack forces Alek to join the suspicious British crew of the Leviathan on their mission.

In the second book, Behemoth, Alek and Deryn become friends as Alek tries to find a place for himself in the Leviathan. A tangled web made of the plans of Alek’s domineering guardian, Dr. Barlow’s secret mission and Deryn and Alek’s mutual conflict between duty and friendship is woven against a backdrop of political scheming in the Ottoman capital. Alek and Deryn go their separate ways, only to be thrown together again in a dangerous plan to break the Ottoman Empire free of the forces trying to draw it into the war. Alek, unwilling to hide away while others fight, plays the public opinion game with the help of a shady American reporter. As their friendship deepens, Deryn struggles with her last great secret and her growing attraction to Alek.

The third novel, Goliath, sees the Leviathan cruising over Russia, and taking aboard a Russian expedition led by the famous Clanker turncoat Nikola Tesla. Tesla has a grand, possibly totally mad scheme to end the war, and possibly all wars, but at what cost? Alek, keen to find a way to stop his people being killed, eagerly supports Tesla, but both his teacher and Dr. Barlow are sceptical. After Tesla receives Admiralty backing, the Leviathan carries him to America. Alek and Deryn’s friendship is sorely tested by mishap and revelation, and must stand up to a great crisis as Tesla’s plan threatens millions of lives in the name of peace, while America balances on the edge of entering the war.

As I said, alternate history is terra incognita to me, but this could not have been a better introduction. Much like C.S. Forester’s Horatio Hornblower stories, the action of the trilogy takes place away from the main historical events, but has an important impact nevertheless. While it’s too bad in a way that there are so few epic battles, it’s refreshing to see a World War I story that involves intrigue, adventure and derring-do abroad instead of the misery and horror of the Western Front. I always found my World War I lessons at school rather annoying because from them it sounded as if this ‘World War’ occurred almost entirely down a hole in Belgium. The Leviathan Trilogy almost reads like military travel literature, with the places travelled to at once fascinating and new and recognizably classic. Historical characters like Tesla, Churchill and William Randolph Hearst affect our heroes’ experiences even as events get steered down a new road.

The real kicker is the characterization. The conflict between doing the logical thing and doing the right thing is classic to military fiction, and Alek and Deryn both approach it in their own ways, but both have to answer similar questions: what comes first, your agenda or your friends? Which is more important, being a good soldier or being a good human being? Alek has his duty and ideals to juggle against his personal sense of right and wrong, while Deryn has to reconcile honesty to her friends with the desire to do her duty and live her own life. The conflicts are genuinely touching and my throat definitely tightened up in the finale.

If the story lacks for anything, it’s details in the world-building. The nature of the setting – the mobile and airborne Leviathan, means it’s hard to get a handle on just what sort of world we’re living in. The full applications and practical differences between Clanker and Darwinist society outside of the military is never explored very extensively, although tantalising hints abound. On the other hand, not telling too much, such as exactly how life thread fabrication works, adds mystique to the story that helps draw you in. Some it feels a bit slapdash though; in particular, even though the Pope has pull over the Clanker royalty (who call the Darwinists ‘godless’ many times) Italy is referred to as a Darwinist nation, which doesn’t make much sense beyond the fact that, despite what my schoolbooks claimed, Italy was an ally of Britain in the Great War. I would have been perfectly fine with Italy being neutral or switching sides, or just being the exception to the Clanker vs. Darwinist rule in the interest of keeping this consistent.

In general, however, the Leviathan Trilogy was a lot of fun. It isn’t very dense or profound, which may disappoint older readers, but the action is thrilling, the story is beautiful and the plot is surprisingly intricate. The world is delightfully original, reminding me of the Golden Compass or Nation crossed with A Series of Unfortunate Events if it took itself seriously. My only major complaint is that there isn’t enough of it. The world is so tantalizingly rich that it’s almost a pity there aren’t more books, although 2013 promises the release of a supplemental illustrated book about the setting. Throw in the wonderful illustrations interspersed through the text by artist Keith Thompson and you have a recipe for a shining, if seemingly under-appreciated jewel of a read. I highly recommend it.

← The Dark Knight Rises: A Thrilling Conclusion
Pixar’s Brave: We Have Bears →

One response to “The Leviathan Trilogy: A Whale of a Good Read”